For someone whose musical career is only eight years old, Bella Flor has certainly covered a lot of ground. More importantly, her musical future is looking decidedly bright and rosy right now. The latest single, ‘Noche de Silencio’ has just been released and I was both delighted and honoured to interview Bella Flor for Joyzine to learn more about the music that shapes her life and her new release.

I ask Bella Flor about her foundation in music and she says, “My music career began in 2013 when I started to play my music for large groups of people in meditation retreats. Listeners at these events shared that my voice brought them into a peaceful and serene space, and this led to opportunities to play at different holistic centers and events all across New York City, and eventually a tour throughout the United States. In December 2019 I had the opportunity to record an album of original songs with producer and multi-instrumentalist Alex King-Harris (Rara Avis), whose former projects include Desert Dwellers, Shaman’s Dream and Liquid Bloom. In the process of creating the album I also got to collaborate with guitar player Arnaldo Herrera of Bóveda Celeste in Brazil and multi-instrumentalist Nacho Rodriguez, student of Diego Palma from Sacred Valley tribe in Peru. Now I travel to different parts of the world playing my music at holistic events and festivals. In the past couple of years some of the gatherings that I have performed at include Eternal Prana Festival in upstate New York, Unison Festival in Victoria British Columbia, and I also had the opportunity to share the stage with Sierra Marin at the Summer Solstice Festival in San Diego, California.”

Bella Flor’s musical roots lay deep within holistic meditation and spiritual connection and I ask how everything began for her creatively. She tells me, “It was the songs of earth-based traditional cultures from around the world that inspired me to sing and eventually write my own melodies. In ancient times, singing was used as a way to connect with a higher power and to bring peace through challenging times. For me, this is how I learned to approach music and this is where my path began. The exquisitely produced albums of artists such as Danit, Mariana Root and Ayla Schafer have influenced my musical style the most to-date. There was a moment listening to Danit’s album where something really clicked for me and I realized that it was my destiny to write my own songs and produce an album professionally. Never having written a song before, I sat in meditation and the artistry started to surface. Mother Earth and her incredible landscapes have also been a huge source of inspiration for me. My songs have been written throughout my travels while I was outside and in absolute awe of the natural world.”

And so to the latest single release, ‘Noche de Silencio’ (‘Night of Silence’). It’s the debut track from a forthcoming album release – Vuela – and it begins dramatically, with sound effects that transport us instantly into a rainforest, before we’re joined by a delightful acoustic guitar sequence, stirring strings and some mellow woodwind accompaniment. Bella Flor’s voice is sharp and precise against the musical background, placing her vocals firmly in the spotlight, without drowning out the music flowing around her angelic voice.

I ask what lay behind the inspirational source(s) for this new single. She says, “‘Noche de Silencio’ was written on a quiet evening under the light of the full moon while I was gazing into the sky at the Moon and the stars. The song symbolizes the deep peace that the silence of the night can bring and is giving thanks to all of nature. Beginning as just a simple recording with vocals and guitar,  the track was sent to artists from different countries around the world who recorded on the track remotely. Once we received all of the recordings, they were sent to my producer Alex King-Harris, who skillfully wove all of the pieces together into a cohesive mix. I had the pleasure of  overseeing  the process of production with my intuitive vision and creative ideas for the unique sound signature.” 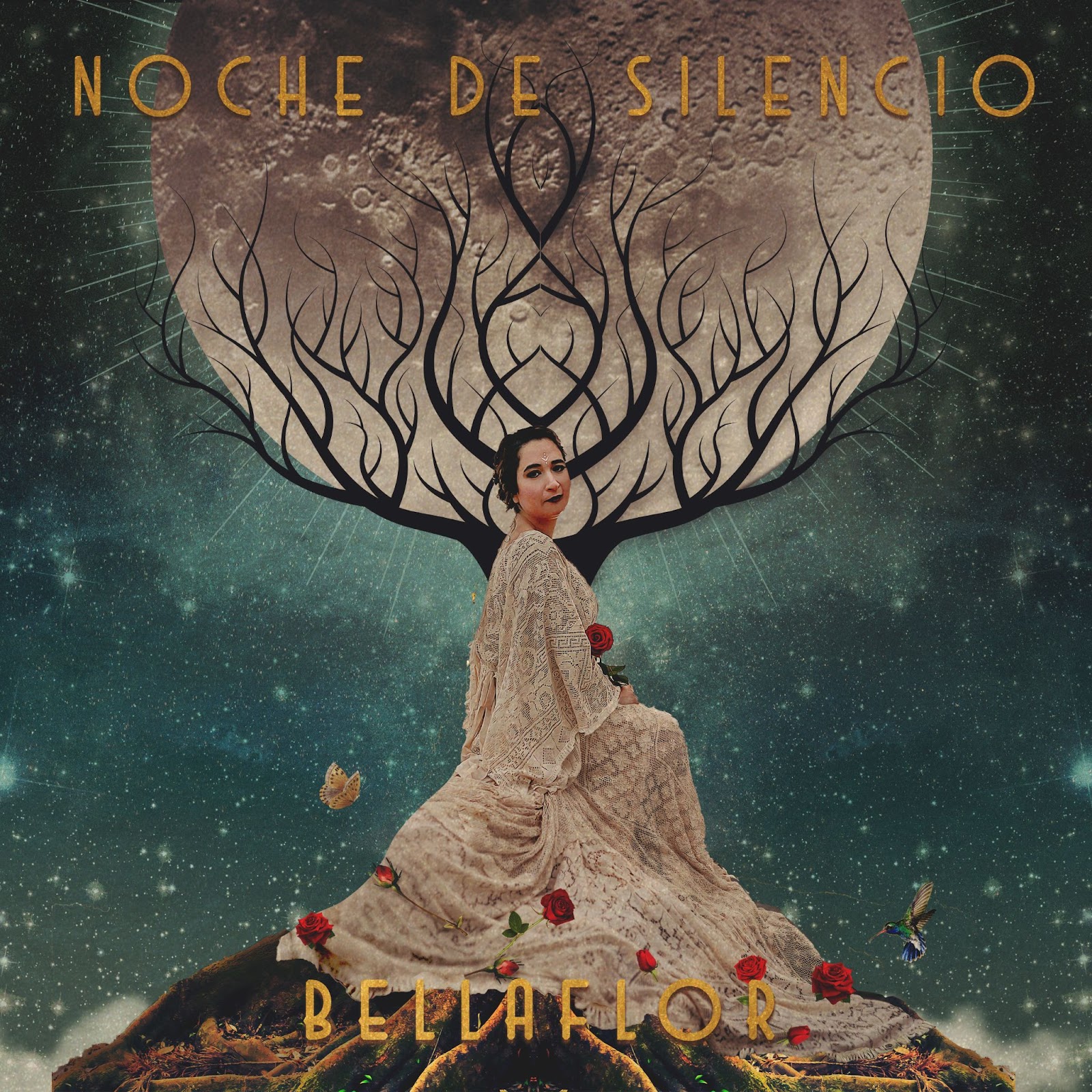 With her music firmly set for continued development and public exposure, I wondered what the future held for Bella Flor. She states, ‘I am very excited to say that ‘Noche de Silencio’ was actually just the first single off of a larger album called Vuela, which will be released within the next year. The songs on the album were written throughout a journey that I embarked on of empowering myself as a woman and finding my deepest passion in life of music. The purpose of my music is to help my listeners connect with and appreciate the beauty of nature, while also inspiring them to experience more happiness in their own lives. Because of this, I hope to tour in parts of the world where I have never performed before so that my music can be exposed to different audiences. With these experiences and travels, I see myself being influenced by new and eclectic sound and instrumentation. I am definitely envisioning collaborations with musicians who bring diverse cultural sound textures, multiple albums in the future, music videos with stunning footage of natural scenery,  and even electronic-style remixes to my acoustic tracks’.

After listening to Bella Flor’s musical collection across the past eight years, it’s very easy to see why her popularity continues to rise, reaching an expansive audience and bringing joy to many. Definitely one to watch, as Bella Flor opens her musical talents towards a global platform.

‘Noche De Silencio’ is out now – stream on Spotify here